The murder of researcher and political activist Lokman Slim, who was found dead on Thursday morning in his car in South Lebanon hours after he reportedly went missing, is still a point of local and international concern. Many question marks have arisen over the timing and motives of the assassination. This has prompted the retrieval and collection of recent statements made by Slim, as they may have played a role in setting to motion the decision to assassinate him.

In light of recently revealed information about the involvement of the Syrian regime in the “Rhosus” ship that unloaded its shipment of chemicals in the Beirut port in 2013 subsequently causing the August 4th, 2020 explosion, Slim had made very important statements concerning the matter on “Al-Hadath” TV channel. He revealed the role of Hezbollah and the Syrian regime in receiving in the ammonium shipment and storing it in the port for 7 years leading up to the disastrous explosion.

Slim indicated that information “confirm what is already known. All one has to do is review the Syrian regime’s use of chemical weapons and exploding barrels that contain ammonium nitrate to figure out the obvious. What’s being exposed today regarding the involvement of Syrian businessmen and their associates in the explosion only confirms what everyone already suspects!”

“Today we are witnessing the scenes unfold completely” Slim continued: “We now know who imported these materials. Most importantly however, we must find out who stored these materials in Beirut Port and who profited from it! Who allowed some of it to be taken out incrementally over the years and to cross international borders into Syria where they were being used to manufacture the bombs that were dropped on top of the heads of the Syrian people!”

A War Crime by Moscow, Damascus, and Beirut

Slim stressed saying: “Today, this information is enough to uncover all what some Lebanese officials have been attempting to hide. Especially by claiming that this was a matter of simple administrative negligence.” He continued: “Today we are facing a war crime whose perpetrators are from Beirut, Damascus, Moscow, as well as everyone who knowingly stood silent or facilitated it. These people have become morally corrupt and bankrupt. This is why we mut not exclude the possibility of new sanctions to include the Lebanese and non-Lebanese who participated in this grand conspiracy.”

The primary suspects in facilitating the storage of such a shipment of ammonium nitrate in Beirut, According to Slim, are those who have the most control over management within the port, and those are the militias of Hezbollah. Not only does Hezbollah have control over the port in the technical sense, but they also have influence over everyone in the public and political sphere and the capability to terrorize them. The fear Lebanese have, even within Hezbollah’s opposition, of accusing Hezbollah of this crime is part of the crime itself. The crime that has befallen upon the Lebanese people, and the Syrian people before them. Slim concluded: “If the explosion was estimated at around 500 tons, there had been over 2000 tons that were used in Syria. Those who turned deaf ears to the latter are all responsible for the former. Every one of them is accused.”

Dr. Toufic Hindi’s Closing Remarks in the «2022 Conference for a Free Lebanon»
Efficacy and invulnerability of Lebanese Political System
100,000 March Towards Civil War
Judge Bitar Issues a Warrant for Ali Hassan Khalil as Right Before his investigation is Once Again Temporarily Suspended ! 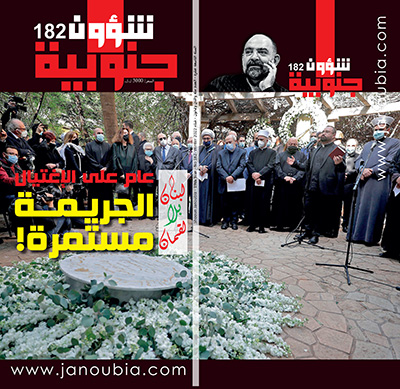